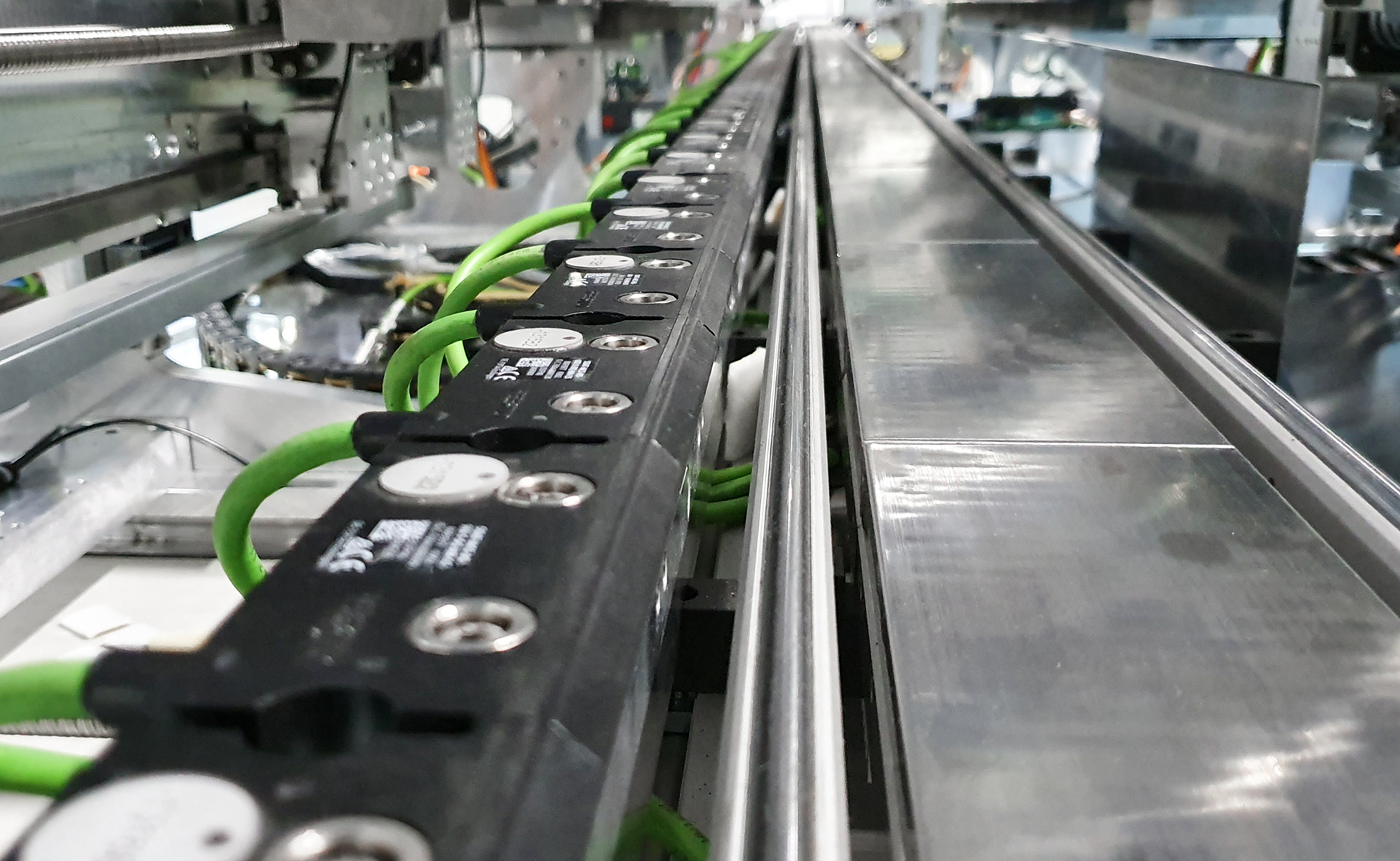 As an innovative mechanical engineering company, AKE is always on the lookout for the latest technologies that make our systems more flexible, cheaper and faster. We are increasingly using an innovative conveyor belt, the so-called Multi Carrier System. The transport system with magnetic linear motors, which is completely equipped with displacement measuring sensors, brings maximum flexibility to our systems.
In assembly systems in which the MCS is integrated, cycle times of just 2 seconds are possible, depending on the component.

The Multi Carrier System in detail


With the Multi Carrier System it is possible to trace the exact position of all workpiece carriers (WPCs) at any time. Positions can also be approached in a targeted manner, which offers enormous advantages when machining components. Above all, this application simplifies camera testing, since it is not necessary to use several camera systems, but simply to move to different positions with the WPC in order to take pictures from different angles with one camera. In addition to the cost savings, this also offers the advantage of reducing cycle times.


Another advantage of the MCS is the individually controllable speed of the workpiece carrier. The system impresses with a maximum speed of up to 4 m/s and an acceleration of up to 50 m/s². Thanks to the individually controllable speed, WPCs can be accelerated or decelerated depending on which station they are at. Fixed distances between the WPCs can also be programmed. The WPCs following at higher speeds catch up with the front WPCs at a certain distance and then move on at a uniform speed.


Processing "on the fly"


In order to achieve even shorter cycle times, we have integrated conveyor tracking into the systems. By adapting the machining axes to the speed of the MCS, the processes can be implemented "on the fly" - means in motion. For example, cutting, gluing, moving and much more can be carried out without slowing down the workpiece carrier.


Combination with Delta Picker for even more flexibility


In addition, we have integrated a particularly fast and flexible robot, the so-called Delta Picker, into our latest system. The Delta Picker is ideal for pick and place tasks and can be used for numerous applications with a potential payload of 20 kg and a range of 1.60 m. His handling activity also takes place in the movement. The Delta Picker uses the distance measuring sensors to calculate the speed and the current position of the workpiece carrier, grips the component while it is moving and places it on another workpiece carrier that moves in opposite directions and is located on a second conveyor belt. This enables a very high material throughput to be achieved, since the two conveyor lines can be loaded and unloaded without having to stop.
ur service manager, Sebastian Scholz, in an interview:

Click here and just fill in the form - we will call you.

How can we help you?
We look forward to your message!